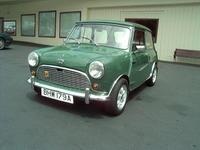 Friday night David and I went to Northern Star coffeehouse to see a band play. After the show we were outside showing our friends DC. Well, one of the band members was carrying out his gear and he came over to admire DC. He told us he used to have a 63 MINI (see photo right for example) with the original Lucas ignition, left-hand drive, etc. and it could make 140hp (I am sure he did some mods)! He was pointing out to his wife how the wheels are set on the far outside of the car, exclaiming "This things drives like it is on rails! You will never drive anything like this, ever!" He was so excited about the car, it was pretty cool. He asked how much I paid for DC and when I told him, his eyes lit up like he was going to go home that night and order one. Ahh..it made me happy to see a classic MINI owner get excited about the new generation of MINIs.
Posted by Darth Cooper at 12:18 PM 1 comment:

Well, DC has been fixed. I picked him up last Thursday and have been happily motoring all weekend. Also, I got the tags (not my personalised ones), so the whole insurance/tag thing is fixed as well.
Friday night David and I took DC up to Kennesaw Mountain. I will post pics soon.
That's all for now.
Posted by Darth Cooper at 1:57 PM No comments: